Perhaps it was a legacy of his laryngitis - an ailment serious enough to cause the cancellation of nine concerts. Or maybe it was the unexpectedly stifling heat.

Whatever, it certainly took a long time for Sting to get into his stride as he returned to one of his favourite venues this week.

The singer, who played guitar and bass, is an exceptional musician.

And, in sidemen such as Jason Rebello (keyboards) and Dominic Miller (guitar), he has surrounded himself with a team of virtuosos.

But for all his skill, Sting is at his best as a pop craftsman - and there were few moments of pop excitement in the first 60 minutes of a slow-burning, two-hour show.

Initially concentrating on his recent album, 'Sacred Love', at the expense of songs spanning his glittering career, he befuddled fans with obscure offerings before winning them over in a barnstorming finale.

New songs 'Send Your Love' and 'Forget About The Future' incorporated ambitious modern dance grooves. But the highlight of a sluggish, strangely disengaged opening hour came from backing singer Joy Rose, who deputised magnificently for Mary J. Blige on the smouldering duet 'Whenever I Say Your Name'.

Elsewhere, Sting rebuked George Bush in 'This War', comparing his presidency to a white-knuckle car ride. But the accompanying cartoons, which showed a squadron of bombers, laboured the point unnecessarily.

The show improved with the moving ballads 'Fragile' and 'Fields Of Gold', but it was only with a jazzy 'Walking On The Moon', 'Englishman In New York' and a vibrant 'Roxanne' that Sting finally summoned up some bite.

The mood quickly became infectious, though, and the show finished in convincing style with a mesmerising Desert Rose plus the Police chart-topper 'Every Breath You Take'. It was just a shame it took him so long.

Support act Joss Stone got to the point much quicker. In a long blue dress and black top, she dipped into debut album 'The Soul Sessions' during an electrifying, six-song set.

Too young to be disconcerted by the contradictions of being a Devon teenager with the voice of a black gospel veteran, she embellished a lively performance by leaping onto the speakers, and fully deserved her standing ovation.

The true test will come when she releases new material in the autumn. But for now, Joss Stone is more than justifying the hype.


A night of sacred and profane love...

There is a certain school of thought that regards Sting as rather naff, a pleasure to be kept under wraps, not unlike WWF wrestling. In fairness he has brought much of the opprobrium upon himself, with his ridiculous (and now rescinded) proclamations on Tantric sex and his social concerns, which appeared somehow less valid because he has what seems from the outside to be a perfect life.

Even his well-preserved cheekbones (albeit ones which are beginning to make him resemble David Owen), intelligence and chat-show bonhomie count against him.

As a result, Sting the artist suffers.

Never as revered as Bob Dylan or Lou Reed, he is perched midway between Phil Collins and Jackson Browne. He deserves more.

At a surprisingly fervid Royal Albert Hall, Sting and his ruthlessly efficient seven-piece band rebuilt Police songs - no 'Message In A Bottle' though and one day he might feel brave enough to attempt 'De Do Do Do, De Da Da Da' - which meant 'Walking On The Moon' as cocktail jazz and the creepy claustrophobia of 'Every Breath You Take' recast as near-punk.

He also tickled his solo back catalogue, with a boisterous 'Englishman In New York' and a fabulously uplifting 'If I Ever Lose My Faith In You'. His real concern, though, was to promote his current album, 'Sacred Love'. Nine of its 10 songs were aired and although not his best work, much of it worked well live.

Some things change; others remain constant. Although he has moved on since the faux-reggae of early Police, into a more challenging milieu since 'Roxanne' (rattled through towards the end), as 'Stolen Car (Take Me Dancing)' and Sacred Love itself proved, Sting has always been fascinated by illicit sex.

The sheer volume of new material made for a less balanced show than a man of Sting's history required and 'Sacred Love' fillers such as This War (with childishly heavy handed cartoon backdrops) and 'Forget About The Future' were never capable of replacing the missing gold of 'I Hung My Head' or 'Seven Days'.

Moreover, Sting was never one to surrender himself entirely to the moment, thus what could have been a celebration of a still-questing spirit was sometimes overly academic.

Still, 'Whenever I Say Your Name', the duet with backing singer Joy Rose, was a gospel-tinged delight and 'A Thousand Years' was a spooky close to two hours which had veered between sublime and indulgent.


Sting at the Royal Albert Hall...

By his own admission Sting had experienced a difficult two weeks before tonight's performance. The cancellation of a series of shows, after being ''attacked by a virus which would not let go'', may have humbled the most celebrated athlete in the middle-age rock pantheon. But not for long.

He sings the opening number 'Send Your Love' unencumbered by an instrument; all the better to display his yogically enhanced physique. The screens behind show a series of multi-ethnic dancers. Luxuriating in the song's thumping beats and vocoder vocals, Sting's gyrates like a flamenco dancer.

The display elicits hoots of appreciation and spontaneous applause from the faithful. But in the selections from last year's Sacred Love album that follow, the latter-day Sting tendency towards musical gentrification takes hold - and won't let go.

Even worse is the low level of inspiration apparent in the faux jazz swagger of 'Forget About The Future', a song so smug it could have arrived in an open-top designer sports car with a personalised number plate. On the screens, mini-skirted Austin Powers-style dolly birds manhandle brass instruments, at the side of the stage stands a suited security guard looking unfortunately like his royal Stingness's footman.

The lack of engagement continues in the mellow musical mineral bath that is 'Dead Man's Rope'. A riveting leap back in time to the conceptually linked but far more vital Police era 'Synchronicity II' provides an urgent, much-needed wake up call. Driving his band with low slung electric bass, Sting jokes: ''I wrote that song when I was 12,'' and it certainly has a vitality absent from his newer material.

A polished professional, consummate musician and affecting vocalist he may be, yet Sting does much to reinforce his reputation for aloofness. When he puts his band through their paces in extended instrumental passages such as set closer 'Never Coming Home', it's technically admirable but lacking in the warmth and generosity that make such displays meaningful.

Metaphors don't come heavier handed than his introduction to 'This War' where posters of warplanes and people carrying ''Don't Do Nothing'' banners fill the screens. Seemingly unable to help himself, he prefaces 'Stolen Car', reconfigured as a particular messy rock soap opera, with an explanation that is simply condescending.

Although the double bass lead rearrangement of 'Walking On The Moon' embraces rather than overcomes the tedium of an old chestnut, there are moments when Sting's subtle star shines. 'Fragile', 'Fields Of Gold', 'Every Breath You Take' and 'Roxanne' form a perfectly poised pop master class presenting his world view with refinement and clarity.

It was a night which presented the many sides of Sting - resonant poet, manipulative schemer and the affirmative, crowd-galvanising rocker.

(c) The Independent by Gavin Martin

In the days leading up to this concert, whenever I mentioned I was off to see Sting, the response was invariably the same: a curling of the lip, and an expression that bespoke either pity or disdain, or both. That's what Sting does to many people, and you can understand why, with his tantric sex boasts, his rainforest-saving antics, and his general demeanour of aren't-I-cleverness.

And yet this is a man who has written and performed some solid-gold pop classics, mainly as the former linchpin of the Police, but also sporadically as a solo artist. He was responsible for one of the highlights of my gig-going career, a show at the Albert Hall about a decade ago that was electrifying from start to finish. So, uncool as it might be to say so, I'm actually a bit of a fan.

This show, which, after the cancellation of his dates in Newcastle, Glasgow and Birmingham, turned out to be the opening night of his British tour, wasn't up there with the best of them, but it was still an absorbing and uplifting night, with Sting leading his as-always immaculate band on a trawl through his solo career, occasionally digging deeper into his Police years.

The laryngitis that had caused him to abandon those shows was still in evidence: 'Roxanne', for instance, was performed largely as a dub version, with the audience filling in some of the gaps. He was clearly straining on 'Invisible Sun' (sic), too, but this didn't prevent it from being one of the show's highlights. His voice, though, sounded perfectly comfortable in the middle-register material that dominated the show - songs such as the soaring, passionate Inside, from his recent 'Sacred Love' album, and the gorgeous key-shifting North African-flavoured 'Desert Rose'.

It's a tribute to the quality of his music that I paid little attention to the expensive-looking kit behind him - video screens that slid around, lighting gantries that went up and down a lot - and focused on the contributions of top-notch musicians such as keyboardist Jason Rebello, who duelled with Sting's bass on the obligatory instrumental workout, and guitarist Dominic Miller's colourful flourishes. Occasionally the show lost momentum, as on the bebop version of 'Walking on the Moon', but in the main this was a good, solid, satisfying and occasionally inspirational performance. 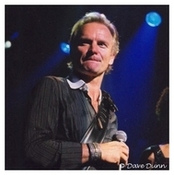 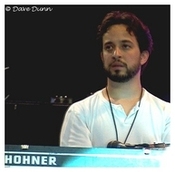 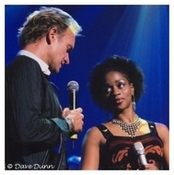 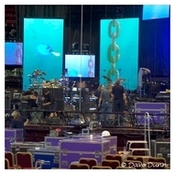 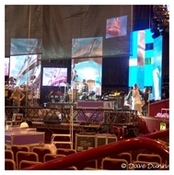 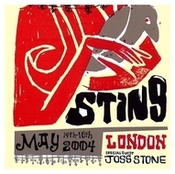 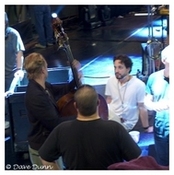 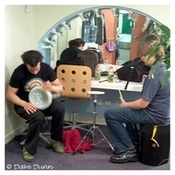 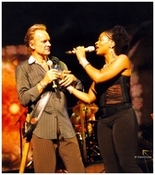 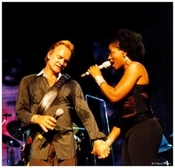