As one gets older one hopefully gets wiser, but there's also the risk that one gets sillier. To put it another way: Some things one does run a greater risk of seeming silly. This is true not least within rock music, where too many performers have trouble growing old with their music. Some succeed, and keep improving through the years, other balance on the brim of silliness, where the traps may be anything from Christian cults and New Age to plastic surgery.

As Sting enters the stage in Helsinki he seems to be the personification af health: Slim and charismatic, in a good mood and with his shirt unbuttoned. But the signs are already there as the stage is being rigged: Too much percussion, dangerously many keyboards. And let alone the fact that Sting pyjama bottoms are being sold outside the venue... But then again, ever since the Police-era he has been cuddly-Sting, a nice bass playing granddad whose voice is a perfect accompaniment to a Cafe au lait on a rainy Sunday afternoon.

Yet, as the band starts playing, it still seems as someone opened a Pandora's box of the nineties' sound that God forgot.

Here, one isn't even able to use the little metaphysical words ''presence'' or ''joy of playing'', that often contribute to balance this sort of monster tours. Even though the music seems superficial, one may sometimes admire the musicians' craftsmanship - Sting doesn't allow this, as everything happens so mechanically. As lean female bodies in latex are being projected, Sting throws in quite an amount of religious and quasi-philosophical ballony: A Buddhist symbol here, an African-inspired element there. And a lot of talk about the future: ''It's just too hard thinking about the future baby/ So let's just get on with the past''. This is called AOR.

But. There was a support act. That's right: Rufus Wainwright.

''I'm so happy to be in Finland, I love Sibelius'', the Canadian performer says, the son of two musicians to each of whom he dedicated a song during the night. Wainwright is approaching his three-minute pop songs with the melancholy of the opera, and one understands why Baz Luhrman let him write one of the songs to the 'Moulin Rouge' soundtrack. Somewhere around there one may place Wainwright - between the melodramatics of the musicals and the quiet self-pitying of the singer-songwriters. What he does definitely isn't uninteresting, but perhaps it still gets a little lame because of his singing style - it is difficult to understand what he's singing about, or even recognising a melody. But it's fun that somebody is proving that the symphonic rock of the seventies wasn't the end of the thought that it was possible to mix loud and quiet.

Wow! Just got back from the gig and it was EXCELLENT! Maybe the best one since MF-tour (which was my first...)!

I bought the tickets through the fanclub and I have to say I was expecting good seats, but we got the ones right in front of Sting in the first row! Absolutely the best seats in the arena. We had a pretty good party with my friends in front of sold out arena, maybe 8000-10000 people were there. But since we had the middle seats in front row, it was like a small club-gig for us, and it really felt that they were just playing for me! Amazing feeling! Sting playing for me just 2 meters away...

Basically the setlists seemed to be quite the same as earlier, but here's something about the songs.

After instrumental version of 'A Thousand Years' (which was playback) the gig started with a very beautiful version of 'Walking On The Moon', Sting playing double-bass. The crowd was pleased... The next one was the techno version of 'Send Your Love', and it worked out much better than in the record! Excellent version and it got people dancing. Afterwards Sting thanked the audience in Finnish, with the only word he said he knows :''Kiitos'' = thanks.

'Inside' was next, Sting singing all the lyrics and it seemed that he had some trouble remembering some of the words in the ''love me like a...'' part, he basicly sang it through from his ''monitor''. Anyway, I like the song and it's gotten even better as a live version. After Inside we got rid of the photographers bouncing in front of us, I think they even got some photos of us dancing in front, and at the time it seemed that everyone else was sitting, so it could be quite a weird photo! Few guys dancing in front of 10,000 sitting people... Actually we were also seen in the morning news in tv... sadly I missed it.

So the next one was 'Forget About the Future', and if I don't remember wrong it had the ending solo from 'Jeremiah Blues', nice little addition. I was expecting naturally 'This War' next, but the next one was 'Dead Man's Rope'. Absolutely the most beautiful song of the night, Sting playing this tiny quitar (couldn't afford a bigger one? :) I've always liked the song, but not so much as it deserves. With this version I've finally made up my mind: I simply love it!

The sound quality was amazing, it was just in right volume and you could hear all the instruments clearly and in great balance. Of course the main speakers were almost behind us, so we had our ''own'' two speakers and a lot of stuff came also from Stings personal monitors. This I noticed when jamming close to the stage... One of the best sound qualities I've heard, and I can say I've seen quite many gigs from many many different artists.

'Synchronicity 2' made people dancing again, it was the old normal version, I miss the third verses ''climbing'' version he used to play. 'Whenever I say Your Name' came next with Joy, much better than on the record. Sting spoke something about the song and Mary J., actually it was maybe the longest speak he has spoken on any Finnish gigs... They sang it hand in hand and they looked so happy singing it together, just like they were in love...wonderful feeling to a love song! Somehow 'I Was Brought To My Senses' started ringing in my ears during 'Whenever I...', and I was quite surprised that it was the next song! Well, just the normal version, love the song, it was nice to hear it once again.

'This War' is maybe the best track on the record, so I expected quite a lot from it. Maybe little too loud, couldn't hear guitars from the drums, but maybe that could be the idea. One of my friends said it was the best song of the gig. The song clearly has gotten it's own life with the verse ''Don't Do Nothing'', as they were selling even t-shirts with the phrase. Also the videos in the background were maybe the best ones of the gig, with bombers flying etc. This song is a keeper, I'm quite sure we'll hear it many times in the future.

Happily, 'Fragile' was next, in the middle of the set and 'Fields Of Gold' after it. Works just fine and people love them. The next one was a little surprise to me, they played the new single version of the 'Stolen Car'. I have to say that it was the worst song of the night, didn't worked out yet as well as it should. Sting even got a little mixed up with the second verses begin, he was little late. Somehow I got a little uncompleted feeling of the song, maybe they'll get it better for the RAH gigs in few weeks.

'Sacred Love' was a ''cool'' version, I expected a much more rocking one, but this was more a listening than partying version. Very much different from the record. And then came 'Englishman In NY'. This was the point when people rushed in front and the party really begun. After that we were just jumping, singing and dancing all the time, so no more thoughts about beautiful versions etc! 'Roxanne' was next with the basic version, nothing new, no 'Bed's Too Big...' as I think he played on previous gigs. Never Coming Home is absolutely one of the best songs on the record, and it was just as good as I expected with 'When The World...' jam ending. Keith and Jason are simply amazing musicians, I just hope that Sting would give them even more things to play. These guys can do it!

This was the end of the basic set, after ''we want mores'' came 'Desert Rose', with Sting and girls singing Cheb Mamis parts, little different version than I've heard. Nice ending with a fake one and after a small pause they played the beginning of the song again. Good idea! 'If I Ever Lose' was a normal version, and 'EBYT' is just what it is...one of the songs in music history I just don't get tired to hear.

After these came the last song, 'A Thousand Years' with a very long ending, completing the whole set nicely. In my opinion this was an excellent thing to start and end the concert with the same song, I really like the feeling it gives.

So, alltogether I was very very pleased, didn't have any too big expectations before so it was nice to hear the different versions of the new songs. The only disappointment was that they didn't play 'I Burn For You', gotta hope they'll add it someday to the list. The band is of course as amazing as usual, well, what can you expect from the best musicians in the business? This new guy - Rhani Krija - had really wonderful time, he really looked like he enjoyed every second of the gig, a good addition to the band. Kipper was back! I'm not sure whether he played during previous concerts, but at least now he is. As I already mentioned Jason Rebello and Keith Carlock were fabulous. I'm not surprised at all that Jason was the only british jazzpianist that Kenny Kirkland really listened... He has filled Kennys shoes really well.

Keith is also a perfect guy to the band, I even think he gives some same feelings as Stewart gave to Police...I just hope he stays with the band (but of course Vinnie is kinda Stings drummer for me...). Joy Rose and Donna Gardier were as lovely as ever and Dominic was just himself, playing wonderfully. Sting - like the whole band - was in really good mood, they really seemed to enjoy playing.

One of the best gigs I've seen and absolutely the best seats! If you wanna get good seats, come to Finland! 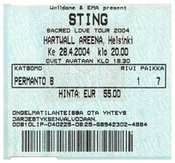