The adage that blonds have more fun was put to the test last night at Madison Square Garden, where light-maned Annie Lennox and Sting shared a bill with mixed results.

Lennox, cast in the role of opener, was a virtual whirlwind for her hour onstage. As lithe and rangy as she was in her days as a Eurythmic, the diminutive singer injected a palpable sense of drama - but not a shred of melodrama - into a set that saw her coax glowing embers into the full-fledged conflagration of 'Missionary Man' and 'Walking on Broken Glass'.

The most vivid testament to Lennox's power as a performer was her ability to draw listeners in with songs that weren't necessarily mainstream touchstones. She won over a still-unsettled crowd with a steely 'Legend in My Living Room', replete with dual keyboard lines, as well as an unblinking take on the death ballad 'Cold'.

Faced with the unenviable task of following Lennox, Sting chose to punt, rather than launch any Hail Mary passes. Settling immediately into his comfort zone, he spent most of his set coasting through smartly arranged mid-tempo numbers that were easy to respect, but tough to love.

From the opening notes of 'Send Your Love', the nattily attired singer did everything he could to ensure that his songs appeared in soft focus. That gauzy backing served a few of Sting's compositions well, including a quietly authoritative 'Synchronicity II' and a melancholy 'Fragile'. More often, however, the detachment served to undercut whatever sensuality the former Police front man intended to invest in songs like 'Sacred Love', which, despite a coy reference to Victoria's Secret, ended up sounding more like a commercial for the Lands' End catalogue.

Sting managed to recover some momentum toward the end of his set, centering the reggae vibe of 'Englishman in New York' with admirable panache. But in the end, his politesse was more hindrance than help. One was left with the impression that the guy needs to learn that, despite the insistence of Emily Post, white-glove etiquette is not the be-all and end-all of pop performance. 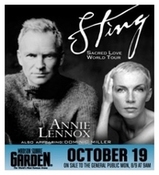