What a great night! I will offer some very meandering thoughts, and have posted some pictures in the Gallery to back up some of the evening (sorry about the typos).

To start, a fantastic interntional gathering of the fanclub was enjoyed by 28 people before the show tonight. Always nice to see Beesquare and great to see her daugher Meg along for the fun; Marianna - thanks for bringing the glowsticks. I think you have started a great trend with that one, and terrific to finally meet my Police Picinic compadre; Kerry, I hope that you feel better now that you are one up on me with a SIGNED Dominic pick;) ; Trini, it was great that you made the journey from Atlanta, but I am sorry that we didn't have the chance to chat more; great that Carla made it to this one, adding elegance to the affair; Pebs2022 - you have guts and quite the style. Kathy made the trek from PA (I believe) and wowed Sting during 'Desert Rose', from the front row with her own, exotic dance. I'm glad Sting showed his appreciation by leaning down and kissing your hand at the end of the song. Lorhud also made the trip north and it was great to see Susan and Deborah as well.

Dominc's and Annie's sets were wonderful, but I have the same complaint as before with Dominic's performance - toooo short. The guy is incredible.

Sting was in great voice tonight and our evening turned out to be much more fun than we had originally planned. I checked the Ticketmaster website this afternoon in the hopes that they would release more tickets to this ''Sold Out'' show and sure enough they did. I bought 2 more floor seats so we could bring our daughters to the concert once again. As we had 9th and 16th row seats, my 9 year old couldn't see a thing with the standing (yay Toronto!!) crowd, so we took up an usher's offer to sit in 2nd row seats until somebody showed up to claim them. Well, no one showed up and the woderful people in front of us had a spare seat, so Jill was able to get a front row view and dance as much as she wanted. To top off the generosity and great warmth of the ushers and other fans, we were right in front of Dominic and he treated her like royalty all night long, beginnning by beckoning her over during 'Every Little Thing' and handing her a pick and interacting with her all show. What a wonderful guy.

About the show, you say? Sting was in great form; his voice was stong and he seemed much more energetic than the July show at the same venue. For that matter, the crowd was also much more energetic. It is amazing how different the vibe can be from one night to another as I stated that I was ''embarrassed to be a Torontonian'' after the July show, but tonight the mood was mush better. This was my 7th show on this tour and this evening I was probably most impressed by 'Dead Man's Rope', 'Whenever I Say' (Joy nailed it, again) and 'Never Coming Home'. We had a huge treat during 'Never' as Herbie Hancock took Jason's place for the jam out and had the whole arena mesmerized - it was very cool. I had wondered to myself if we might see him as my wife had heard that Sting and Herbie had recorded 'My Funny Valentine' together the day before at at studio in Toronto that her company uses.

I have read lots of posts lately about the long, improvised parts of Roxanne and people general dislike of it and I think I am in the minority here as all I can say is ''Bring it On!'' I love what Sting has been doing to that song all tour.

Well, this probably marks the last of my big Sting adventures in a year that has been full of them and I just want to say thank you to Sting.com for the chance to get great seats, win contests (Muchmusic), and meet some fantastic people.

I really wish I could play hooky tomorrow... 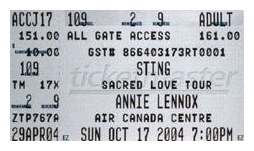 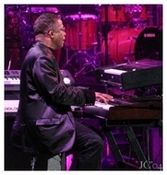