At Tuesday night's concert in a packed Ohio Theatre, Sting slogged through a two hour set of songs with the air of a man trying to complete a marathon rather than one going for a joy ride.

Part of the problem may have been that he is recovering from a nasty virus that forced him to cancel a number of concert appearances and left his voice hoarse. But he also seemed confused as to whether to present himself as a serious musician or as a 52-year-old sex symbol.

Audience members, few of whom were younger than 30, didn't seem to notice the conflict. Bobbing and swaying, they shrieked and jumped to their feet when Sting took off his jacket to reveal an opennecked shirt, rolled up a cuff or bumped his hip a few degrees.

He performed most of the songs from his newest album, 'Sacred Love'. On the studio album, they sound intimate and rhythmically intricate, backed by instruments ranging from sitar to trombone.

Backed by a middle-of-the-road band emphasizing keyboard and drums, however, they grow monotonous. The lyrics are intriguing, but the songs lack melodic power. 'Stolen Car', mysterious on the album, lost its haunting strength when performed at a jaunty pace, and the bluesy 'Dead Man's Rope' lost subtlety.

Only the Grammy-winning 'Whenever I Say Your Name', performed as a tribute to decidedly secular love, took off. Backup singer Joy Rose ably filled the place Mary J. Blige takes on the album, and the two rocketed through a soulful duet.

Sting dutifully performed all the expected hits from his years with the Police and from his solo albums. The quieter numbers, such as 'Fragile' and 'Fields of Gold', were touching but revealed the strain in his voice. The cocky 'Englishman in New York' and rousing 'Roxanne', performed as singalongs, didn't attempt to shift the oldies into new musical territory.

For the most part, the band served strictly as accompaniment: None of its members stood out. The two backup singers also doubled as dancers, swaying or strutting in place in the simplest of choreography. Three video screens behind the band displayed obvious choices for imagery: gold tones for 'Fields of Gold', red ones for 'Desert Rose' and bombers during 'This War'.

Much of the time, the screens were filled with slow-motion images of undulating women.

Sting's set was preceded by a sleek jazz quintet headed by trumpeter Chris Botti, who played mellow standards, although his music was occasionally disrupted by the laughter of Sting fans in the lobby.

The Ohio Theatre isn't an ideal venue for what is essentially a scaled-down stadium show, one that finally had neither the charms of intimacy nor the flashier pleasures of all-out rocking. 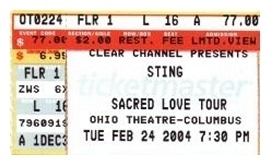