All of a sudden it seems like the Police have always been in the front line, as if they never had a breakthrough, as if the kids never had to be told they were alright. Inevitable, I suppose - the qualifying rounds become part of the whole new mythology; but not every band who have their half-hour in the weeklies prove to have that mettle. Now at least in the semi-permanent wave, the Police look to be rocking very steady.

Although possible the most overexposed trio of blonds since the Beverly Sisters, there wasn't the remotest chance that their Hammersmith gig wasn't going to consolidate, rather than shatter, expectations. Live they deliver a storm-trooping but still impeccably subtle version of the recorded material.

Looking tres sportif in a collection of boxer shorts, singlets and track-suits, they gave their best for the regulation hour, leaving the masses - an odd collection of sensible punks, Australians, young straights, old straights and schoolgirls (mums and dads were waiting nervously in cars parked outside) - gasping for more in true showbiz fashion.

Sting - he reminds me of David Hockney: peroxide hair, affable Northern manner and he'll do well in pictures - has amazing control. He can hush a crowd with an inflection of his voice in the second syllable of 'Roxanne'. By contrast, Summers is retiring onstage and Copeland disappears - literally - behind his kit. The chandelier -splintering vocals took some toll - during 'Roxanne' the voice suffered a temporary lapse of power and flexibility - but they are magnificent. Apart from the occasional rough harmonies, the band produced perfect, multi-textured and bruising extended versions of their works.

'Walk On The Moon', and 'Bring On The Night' were outstanding, with really pretty rippling lead; a football chorus of 'I Can't Stand Losing You', 'Message In A Bottle' (whose o-ending lines oddly evoke the English folk tradition), 'The Bed's Too Big' and 'Born In The 50s'.

No real surprises. The fractured songs, the jittery drums, superbly integrating bass, tantalisingly sparing lead and those sweet, piercing reggae-pop vocals have quickly become familiar. But this must be a mark of the band's direct-line originality. Like I said, a foregone conclusion.

(c) Melody Maker by Susan Hill
Comments
0
You must be a logged-in member to add comments. Log In | Subscribe 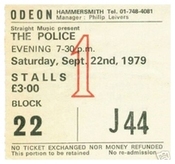 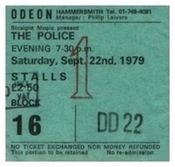