I am 50 years old next month, and now consider myself to be a 'Concert Veteran'! Music has always played a huge part in my life. My earliest memories - as a toddler - are of listening to Nat King Cole ('Sweet Lorraine') Sam Cooke/ B.B.King/ Louis Satchmo Armstrong/ Herb Alpert/ Frank Sinatra/ Bing Crosby/ Dean Martin/ Perry Como/ Elvis Presley; and the all embracing spiritual Gospel Music.

The very first Concert I attended was Marc Bolan - Tyrannasoraus Rex - way back in the early 1970's at the Free Trade Hall, Manchester. (I saved up my meagre pocket money to go!) I have very diverse tastes in music; I enjoy Bach as much as anything today's musicians can offer - in fact much of today's music is influenced by the great Classics. I have been to hundreds of concerts over the years. In the past 12 months I have taken my family to the following live concerts:- Craig David; Justin Timberlake; Van Morrison; 50 Cent; and Eric Clapton. My young children have also seen the legendary Bob Dylan performing at the MEN as support act to Van Morrison!

In fact Chris Botti, was so inspired to see a young face in the middle-aged audience, that he jumped off stage to personally serenade her! We have to confess that we feel Sting's concert on Monday outperformed, even the legendary Eric Clapton. (May 04) The whole presentation was slick and professional - down to the backdrop's special effects; superb lighting (Clapton's 'raw' lights blinded the audience); and superior 'Martin' speaker system.

Sting's support act - Chris Botti could not have been bettered - he plays with the grace and feeling of an Angel. His exquisite playing inspired my 20 year old 'hip-hop' son to buy his CD the following day! I could not imagine a life without music. Music feeds my soul. Music can be exciting, vibrant, emotional, comforting, uplifting, and to me Sting, along with Chris Botti gave their heart and soul to us and for me/us it was the best 'all round' concert we have ever been to!

The official tour T-shirt has the words ''Sex and Music'' emblazoned on the front. Which was appropriate, as Sting seems to take the same approach to both pursuits.

Thanks to a few ill-judged remarks many years ago, the world knows that Sting and his wife indulge in tantric sex, which apparently takes them light years to complete. Unfortunately, we were treated to a similarly drawn-out affair last night with not much to show for it in the end.

Taking to the stage looking his usual lean, handsome and dapper self, Sting looked like he had all the ingredients to satisfy us.

With a bulging songbook, a very long pedigree and dressed in designer gear, he oozed a sophistication that put us instantly in the mood.

Yet all we got for the most part was plenty of huff and puff, lots of effort and sweat and regular reassuring comments to put us at ease.

There were the odd thrills to be had.

An early 'Synchronicity II' pulsated around the venue, promising much for the night ahead.

And Sting's throaty vocals were spot on, which was especially good news considering this show had originally been postponed due to him suffering laryngitis.

'All This Time' and 'If I Ever Lose My Faith In You' also warmed us up nicely.

But whenever we were getting excited, our hero lapsed into meandering jazzy self-indulgence which clearly pleased him but left many of us aching for better things.

Let's hope this isn't how he plays it in the bedroom. 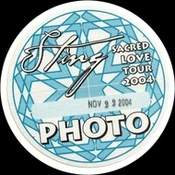