As homecomings go, this one seems to be have been going on forever.

But when you can sing songs like Gordon Sumner, who cares?

Having been one of the thousands left all dressed up with nowhere to go, back in May, when Wallsend's favourite son cancelled his original Arena gig because of laryngitis, I was expecting a little bit extra from our very own superstar last night.

But over an hour and a half of classic hits, two encores and an apology for the six-month wait meant me and the rest of the sell-out crowd were more than willing to forgive and forget.

Of course when your home town concert includes a set list with 'Fields Of Gold', 'Englishman In New York' and 'Roxanne' on it, you have got to be pretty confident about the response you will get.

In fact, for many last night, the seats were completely unused as they stood up all the way through.

The highlight for me was an unforgettable rendition of 'Every Breath You Take' which had the whole Arena hanging on every word.

Sting has had his ups and downs with the Geordie public over the years but I think this Wallsend lad has finally come to terms with himself and his place in North East pop history.

On the evidence of last night, it is at the very top.

For the first 15 minutes or so, Sting let the music do the talking, punctuated by the occasional rocker's ''Tha'YOWW!''

Then he thanked the audience properly for its patience. ''I'm seven months late. I'm very grateful that you've come back again.''

The concert was postponed previously because Sting had a voice problem. Ironically, he chose probably the coldest night of the year on which to perform.

Dressed in a dark jacket over a Harry Hill collar, the Wallsend-born singer-songwriter ranged over his considerable back catalogue aided by a top notch band. Jason Rebello on keyboards is worth turning out for on his own.

Not a touchy-feely kind of performer, Sting's aloofness - maybe shyness - doesn't make for a great rapport with the audience. But the singing voice, that spine-tingling wail, is compensation. We had to wait ages for 'Roxanne' (''I must have sung it 85 million times'') and this funked up version lasted nearly as long as 'Outlandos d'Amour', the album on which it first appeared.

The hauntingly beautiful 'Fields of Gold', from 'Ten Summoner's Tales', better suits his grown up self - sometimes sentimental and infuriating but still a heck of a talent.

(c) The Journal by David Whetstone

As the world's most famous exponent of tantric sex, Sting is well known for taking his time to get anywhere. The 'Sacred Love' tour has been rescheduled from May, when the waspish singer lost his voice from either too much singing or too much panting. However, his hometown crowd is rewarded for the wait with a two-hour-plus marathon at £36 a head. It's a tantric set compared to the eight-song private quickie Sting performed for Microsoft man Bill Gates recently - for £273,000.

Gates should have just flown into Tyneside for this show, which encompasses every stage of Sting's career. There are moments of flushed excitement, occasions of serene satisfaction and endless stretches where you end up gazing at the plumbing. Despite a clutch of songs from Sting's most recent album, 'Sacred Love', and his claim to be ''excited, but anxious'' about coming home, the set has a routine feel. Sting tastefully invites everybody around to hear his cocktail jazz collection - 'Fields of Gold' is exquisitely played but dull - but what people really want is to get down and dirty with the Police's rawer greatest hits.

This is a more human Sting, however, than the preachy, rainforest-soaked former schoolteacher of yore. He introduces a song about the Geordie winter with the words ''That's why I moved south'' (to Malibu, not Darlington). He talks of ''dark characters on the world stage. George Bush, Dick Cheney, Osama bin Laden ... and Alex Ferguson.'' Thousands of Geordies roar but Middlesbrough are more of a threat to the Toon than Man United these days and Sting seems ever so slightly out of touch. He missed a chance to find a new hip-hop audience when Puff Daddy sampled 'Every Breath You Take', and while young bands such as Grand National mine his post-punk period, the man himself seems to aim tunes at car stereos. He can still thrill when he varies the routine. He's sung 'Roxanne' ''85 million times'' but reinvents it as a dub. The uncharacteristically exuberant Eurodisco of 'Send Your Love' sees Sting hurl off his jacket, and where the music fails there is, at least, still a sexual frisson. During 'Sacred Love' models gyrate in their lingerie on a screen, while the hordes of women in his audience are disappointed that, unlike previous visits, the 53-year-old no longer goes topless.

(c) The Guardian by Dave Simpson

Comments
1
You must be a logged-in member to add comments. Log In | Subscribe
September 23, 2011 posted by watsontotty
Simply Magic
What a night it was when i watched Sting return home to the North East and i'm so grateful he had problems back in may and had to come in November or we would have missed it. Simply Magic a night i will never forget but would like to repeat PS Please come back home again soon
Newer comments    1 - 1 of 1    Older comments 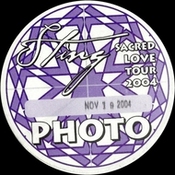