While U2 were previewing their new album at a small gig in their Hanover Quay studios, across the river another old new waver was bringing his Sacred Love tour to a sold-out crowd at the Point. I know where I'd have preferred to be.

It's nearly 20 years since The Police disbanded, and that trio's tight, snappy pop sound has long given way to a looser, less immediate style of muso soul. Still, 'Synchronicity II', welcomed like a well-preserved old friend, offers the promise of more Police classics to come. 'Brought To My Senses' brings out Sting's Celtic side, with a lilting air that evokes colleens moving through the fair; 'Sacred Love', the title track from Sting's current album, is a brash tune with tantric sex appeal, beefed up by giant videos of ladies in lingerie. ''I know nobody was looking at me during that song,'' he quips.

The band, featuring guitarist Dominic Miller and keyboard players Jason Rebello and Kipper, do their best to conjure up some stardust on 'Every Little Thing She Does Is Magic', but some real magic comes when backing singer Joy Rose takes on Mary J. Blige's vocal parts on 'Whenever I Say Your Name'.

He encores with 'Desert Rose', 'If I Ever Lose My Faith In You' and 'Every Breath You Take'; he should have left it there, but he can't help coming back with one more, 'A Thousand Years'. Seemed that long.

Fans of the legendary Sting showed up in thier thousands last night to watch the former Police frontman arrest a sold-out Point Theatre.

When Sting finally came on stage just after 9pm, the atmosphere was electric as the audience erupted.

He delighted the packed stadium for almost two hours with renditions of some of his most famous hits both as a solo artist and from his days with The Police.

Opting to perform most hits, both old and new, in a slow mid-tempo style, Sting opened the show with his latest single, the percussion-heavy 'Send Your Love', and then moved into '80s nostalgia, delighting the crowd with the Police's popular hit 'Synchronicity II'.

He continued to coast through the first half of the show with a series od mid-tempo numbers but as the crowd became more excited, Sting recovered momentum. Skilfully plending reggae with jazz to deliver his early solo hit 'Englishman in New York' with admirable panache.

The British star, whose real name is Gordon Sumner, went on to rise to the occasion giving sterling performances in a number of hits including 'Roxanne' and 'If I Ever Lose My Faith In You'. 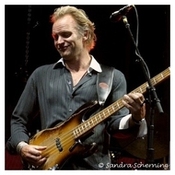