It was the summer between 7th and 8th grade. I was 13. I had become a Police fanatic that year. I believe it was my mothers doing.

The prior Christmas Santa had brought me the Beatles Red and Blue albums, Sgt Peppers, Part 1 and Part 2, and Ghost in the Machine.

I was hooked. For my birthday I received Outlandos, Regatta, and Zenyatta.

I think I had heard the Police were on tour (from Martha Quinn on MTV no doubt!) but never dreamed of going. My mom surprised me with the news that we were going to go see the Police in Charlevoix about a 5 hr drive from Detroit. I could invite 2 friends. My brother also went and he could invite 1 friend. And my Mom and Dad went too. The day before we left for the concert I was goofing around jumping off our picnic table and sprained my ankle. I was terrified that we would not go to the concert but my mom said we still would crutches and all.

We all piled into our station wagon and were on our way. I dont remember much of the drive. I remember waiting in line with my parents for the port o potties. Half trying to act like I was not with them. And half staring at all the stoned/drunk people walking around without trying to look like I was staring.

We had pretty good seats. What did I know? We had great seats, about 15 or 20 rows back center stage Mom scored the great tix!! Oingo Boingo and English Beat were supposed to open. I dont think that Oingo Boingo showed I didnt care. And I only cared about the Engish Beat because of the pic I had of Sting with their tour shirt on.

During the Engish Beat warm up this guy came and sat right behind us that looked EXACTLY like Stewart. My friend and I were FREAKING out. We were like Its him, Its him. We took my Dads camera and snapped some pics of him. We were real smooth! I just got out the photo album and looked at them. And I still think it could be Stewart. What freaked us out was shortly before the English Beat finished, he got up and left and never returned for the reminder of the concert. In our minds, of course why would he return, he was up on stage behind his drum kit!!!

One of my fondest funniest memories is of my Mom & Dad getting up on the folding chairs and cheering and screaming during the concert. I remember thinking - Oh my God, my parents are so old and they are standing up on folding chairs!!

The crazy thing is, I just realized this morning, in 1982 my Mom was 40 years old and my Dad was 43. I remember thinking they were so old. It is bittersweet that I cant share these memories with my Mom, she passed away just last April from Lung Cancer at age 64. It sucks not being able to talk to her about this. She would be very excited for me.

She supported my fanaticism for all things Police and Sting even after I moved on to college and then adult life. I would often get calls from her that she saw that Sting was going to be on TV or hosting SNL and she knew I would want to tune in.

I never remember asking for the Beatles albums or Ghost in the Machine. Perhaps she and I had a shared interest and I was just too wrapped up in being a teenager to realize.

Another funny memory from the concert was after Stewart left from behind us, these other guys in their twenties sat there and then asked my mom if they could borrow her lighter to light their cigarette. My mom said no. I think my friend and I thought that was hilarious.

I remember screaming my head off and swooning over Sting. I remember walking back to the station wagon and falling asleep in the back-back as we called it. Thinking of it now, I cant believe my Dad woke up, drove 5 hours, watched a concert, and then drove 5 hours back home with a car full of teenagers. We never realize how cool our parents are until we are much much older.

The next summer I had tickets for Synchroncity at Joe Louis Arena. However Sting hurt his voice or something yelling at a Tigers game (go Bleacher Creatures!!) and they had to reschedule the concert. The date they had rescheduled to our family already had a huge Salmon Fishing Trip planned on Lake Michigan. I begged my mom to let me stay back and go to the concert instead but she wouldnt budge. Just as well I guess. My sister saw them in Cincinnati. It was all a bit over the top with the costumes and such. Synchronicity Tour was so highly stylized. The beginning of the end I guess.

Not sure if it was the same time frame or not, but my sis did stand in line to have Andy autograph a copy of Throb for me. Still have it.

I am surprised how emotional I got retelling my tale. Wish my mom were here to relive the memories with me. Think I'm going to call my Dad first thing in the morning and see what he remembers. 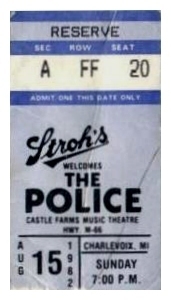