There was no sting about it - no con game, no put on.

On the contrary, the performance by Sting and his eight-member band Friday night at The Summit was a triumphant two-plus hours of solid musicianship.

It would have been easy for the film and rock superstar to lean on celebrity and hit power to carry the show. He didn't. Sting, 35, gave fans of his reggae and jazz-based sounds their money's worth, playing a lengthy, two-set concert without an opening act and letting the music, not the glitter, sell the performance.

Indeed, this was a momentum-building return for Sting, who is now on his second solo tour since departing the Police. He first left the nest with a risky, jazz-based band, and it worked so well that he returned with its nucleus: Kenny Kirkland on keyboards, Branford Marsalis on saxophones and Dolette McDonald on backing vocals. They were joined by another keyboardist, two percussionists, a female bass player and a lead guitarist.

Sporting longer blond locks and a plain black suit - sans shirt - Sting opened his show with 'Lazarus Heart', off the new 'Nothing Like the Sun' album, then segued briefly into the Police's 'Too Much Information' before playing his biggest recent hit, 'We'll Be Together', a funky frolic with a strong radio hook. He followed with the new 'Englishman in New York', encouraging an audience sing-along for the chorus ''even though it's ridiculous'' (in Texas).

Next up was the new 'Sister Moon', a slow, sultry, smoky-nightclub number with one of Sting 's strongest vocals of the night and a good soprano-sax solo by Marsalis.

Other standouts in the 75-minute opening set were the new 'Rock Steady' and Sting's biggest hit from his last album, 'If You Love Somebody Set Them Free'. Although Sting has become known for his Third World, human-rights politics, he didn't thrust them on his audience Friday night. For the evening's most political song, however, he let the music speak for itself.

This was 'They Dance Alone', a tribute to the survivors of missing political prisoners in Chile and one of six songs from Sting 's new album that he recently released on a Spanish-language EP. With its lovely, haunting melody and soulful message, 'They Dance Alone' was a stirring, eloquent opener for the second set, which also included a hard-rocking 'King of Pain' and encores of 'Fortress Around Your Heart' and 'Don't Stand So Close to Me '86'.

Sting was upbeat and playful throughout, often prancing and dancing across the stage. At one point he performed a funny, elaborate twist, and at another he and McDonald swayed slowly atop a high tier. He played keyboards and acoustic guitar occasionally, but his band took care of the instrumental muscle.

Marsalis and Kirkland were super in support, and two new musicians also stood out: keyboardist Delmar Brown, who had a scat solo mixing vocals and his instrument much like George Benson, and Jeff Campbell on electric guitar.

The latter was the show's best-kept secret. After soloing briefly in the opening set he faded into obscurity, but in the second stanza he played two fierce guitar solos for - of all things - the initially mellow 'Little Wing'. The crowd, mellow at times, received tiny flashlights at the door - the masses waved and blinked them to the music - creating a fanciful effect, as if the arena was sprinkled with pixie dust.

There was certainly some stardust in the air, for Sting is also known for his movies. In fact, he brought his own big screen with him.

Suspended above the stage, it displayed the feed from three cameras - one hand-held, two poised in a shallow pit. With varied perspectives and a crisp, smooth edit, this provided an instant minimovie of the event, one that was valuable to those near the rear of the arena.

Purists may balk at the artifice of such a thing for a live event, but it certainly had no effect on the integrity of the music. And for Sting, a man who could get by on star power alone, the music was clearly the story upon his return to The Summit. 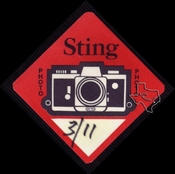 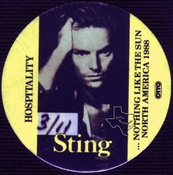