Building on the foundation of themes from his new record, Sting and seven fellow musical masons fused a framework of textures, style and pure energy Monday night at the Ritz.

Was it pop, or jazz, or rock? Did it matter? Not at all. Sold-out audiences Sunday and Monday heard Sting run through the songs he'll perform on his upcoming tour, most of them from his latest album, '... Nothing Like the Sun', in a firmly grounded excursion that featured some magical explorations by some talented musicians.

Sting made few dips into the past. There were a couple of Police anthems - including 'Spirits in the Material World' and a restructured version of 'Don't Stand So Close to Me' - and the elaborate 'Fortress Around Your Heart' from the 'Dream of the Blue Turtles' album mixed in with the fresh material. But Sting clearly is not assembling a ''greatest hits'' tour, unless drastic changes in the playlist are made before the tour opens later this week in Rio de Janeiro.

Sting made a caveat early in the two-hour set: ''We might make some mistakes, but what the hell.'' There were a couple of ragged moments when the musicians weren't quite together - a constant challenge because of the rhythmic changes in much of the new music - and Sting at one point lost track of the lyrics. Fortunately, a fan up front had brought a lyric sheet and handed it up to Sting.

Planted stage center behind a mini-keyboard that held a Sunbeam portable humidifier, Sting fashioned a set that moved smoothly from the lilting 'Lazarus Heart' into the rich rhythms of his current single, 'We'll Be Together'. The sound of 'Be Still My Beating Heart' was slightly offcenter, but the skippy beat and cleverness of 'Englishman in New York' went over big, predictably, on 11th Street.

Branford Marsalis, the saxophonist Sting had employed on his two solo records, popped in to pepper 'Englishman' and traded some bluesy, swinging riffs with Steve Coleman, who'll play horn during the tour. But it was just a visitation.

I didn't miss Marsalis. As it is, the band is rock solid. Coleman might have been slightly overwhelmed by the excitement clicking between the players and the audience, but both Delmar Brown on keyboards and percussionist Mino Cinelu were near ly giggling as they took turns on solos.

Guitarist Jeff Campbell and Tracy Wormworth on bass - her father, Jimmy, was a jazz drummer in New York - were anchors. Campbell took a razzle-dazzle turn in the spotlight with the solo theme from Jimi Hendrix' 'Little Wing', an atmospheric love song that shines so brightly on the 'Sun' album and profited by some improvisation Monday night.

'Straight to My Heart' is a clinic in tempo; just when you think you've got the beat down, there it goes. Drummer Smitty Smith kept it effortlessly.

Sting segued into the evocative 'They Dance Alone' - by then, the heat and the waves of steam from his personal humidity machine had turned his blond hair into a wet-mop - but after the vocals, Kenny Kirkland, also on the keyboards, charged in to turn the somber tune in a joyous jam.

Kirkland was luminous thoughout the show, whether he was hunkered down into the rhythms or tossing a bright smile toward the audience. Kirkland's easy style can be deceptive. He is not the heart of the band - that's because the band appears to be a democractic outfit - but he was the most endearing character on stage.

Sting, his languid vocals simmering midway through the show, was taken in by the warmth and the several bouquets from fans, and he bent down a couple of times to touch hands.

For the second hour of the set, the Ritz was in a groove, the audience feeding on the music, the musicians high on their own talent and the band's symbiosis. Was it pop, or jazz, or rock? It was a night when such categories were transcended.

(c) Newsday by Stephen Williams
Comments
1
You must be a logged-in member to add comments. Log In | Subscribe
August 14, 2015 posted by RobbyAmar
I went to both nights at the Ritz
Since it was general admission, I went around 4pm so I could get close to the stage. It was freezing, but I was 19. I did make it to the stage and watched with my elbows up on it. In the description of the show, there is a mention of Sting forgetting the lyrics - it was for Rock Steady and someone in the audience threw the cassette insert that had all the lyrics on it (that thing was almost 2 feet long). Sting held it up, looked for the song, read the lyrics and then thanked that nice person. He wanted to autograph it somehow, but since he didn't have a pen handy........he bit down on the cassette insert!! banded it!! and gave it back. I wonder if they kept it. Great show with an abundance of songs. Great venue, very intimate. All eyes were on the stage, taking it all in and savoring every moment. Not one cell phone...
Newer comments    1 - 1 of 1    Older comments 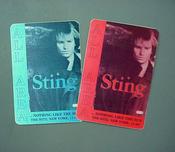