When Sting wrote classics 'Roxanne' and 'Every Little Thing' it is hard to imagine he did so with the backing of an orchestra in mind... reports the Manchester Evening News... 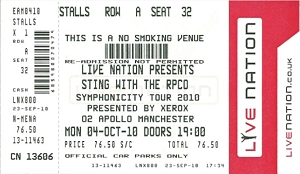 When Sting wrote classics 'Roxanne' and 'Every Little Thing' it is hard to imagine he did so with the backing of an orchestra in mind.

But for a tantric-esque three hours last night the age-defying 59-year-old surrendered his back catalogue to the Royal Philharmonic - and it was a match made in Manchester heaven.

This was Sting with the sting taken out, even the venue switched from the cavernous M.E.N Arena to the acoustically superior and more intimate Apollo; an invigorating yet relaxing performance for a Monday night crowd with tomorrow morning's commute on their minds.

Of course, pop and classical liaisons are nothing new. Often though, they deteriorate into a mirky battle for superiority. Not here. And by happily handing over the reins Sting emerged the victor.

His work, haunting enough in its original life, was given a swooning edge that saw it silkily sink to even deeper, darker depths.

'Roxanne', stripped of its sharp, high pitches, was a revelation. Melancholic, mournful even. The orchestra put on its red light.

'Shape Of My Heart' was uplifting, almost calypso-like, with the foot-tapping frontman rooted to the spot while his backing group ('the biggest band I've had') bounced up and down with their beat. Twice he moved to the edge of the stage to watch them at work, entranced like the rest of the crowd.

It was only between the songs that Sting took over and like a lecturer preaching to his students he commanded the stage.

It was hard to argue. More tutorials followed, from a critique of the miners' strike ('it was a complex issue') to the unfounded fears in the Cold War years. There were even quotes from the Bible.

Not that Sting takes himself too seriously, as a spot of line dancing in 'This Cowboy Song', an homage to a Newcastle childhood spent watching Rawhide, proved.

'If Moon Over Bourbon Street', was a little self indulgent, 'King Of Pain' captured the night at its best.

Crescendo after crescendo had the audience on its feet, applauding the wall of noise from the orchestra.

An unlikely triumph? Not so much - this is Sting, remember. Assurance and confidence have never been an issue with this one.

If he could bottle it and sell it to frail sports stars he would make even more millions. He pulled off this one by taking a step back.

And by the end of the night it sounded as though the classics his devoted followers know and love had been made for brass and woodwind.

Oct 5, 2010
Sting to become honorary president of Tyne Theatre...
North East rock legend Sting is among a group of showbusiness legends who have lent their support to one of the region's most historic cultural buildings.
Read more
+