Sting may be celebrating 25 years in music, but the one-time "Police" frontman hates to look back, he told AFP on the final stretch of a year-long tour that wraps up in Asia in December.

"I'm not a very nostalgic person. It's just not in my nature," the singer said in an email interview, before arriving in France this week for the latest leg in the "Back to Bass" tour, launched in 2011.

Once the tour is over - the last programmed date is in Jakarta on December 15, final stop after half a dozen Asian gigs - Sting intends to move on.

"After this tour, I'm switching gears a bit and will continue work on the play I'm writing," said the singer, born Gordon Sumner, who just turned 61.

Based in his native city of Newcastle in northern England, and entitled "The Last Ship", the musical work tells the story of shipyard workers who decide to build their own vessel.

"We're in the very early stages, but I've found myself very inspired. I've written a lot of new songs for the project. It's completely uncharted territory for me and it's quite exciting."

These last few years, Sting had shot away from The Police's 1980s repertoire, with the 2006 "Songs of the Labyrinth" featuring an Elizabethan lute, and the 2009 "If On A Winter's Night" inspired by the chilly mornings of his childhood.

"Throughout the process of compiling material for the (25 Years) box set, I was sort of forced to look back, when my instinct is always to move forward."

Even in Police classics like "Englishman in New York," "Message in a Bottle" or "Roxanne" - "which I've probably sung thousands of times" - Sting said there was "always something new to be found."

"It is my job to sing these songs every night with the passion and same sense of discovery as when I wrote them."

© 2012 AFP
Comments
3
You must be a logged-in member to add comments. Log In | Subscribe
November 16, 2012 posted by ishigami
Back to Bass Tour
You are not coming to Japan? I believe you will come! ishigami
November 05, 2012 posted by satoko
from Japan
It is very very disappointing and sad that he is not coming to Japan in his Back to Bass tour this time. We are recovering from the disaster at Fulushima and we need the power of HIS music... Hope we can see him sometime soon again in Japan. We love you, Sting.
November 05, 2012 posted by good_rabbit
Police Classics !
excerpt....in Police classics like "Englishman in New York"...hmmm, i never realized this was a Police Song...
Newer comments    1 - 3 of 3    Older comments 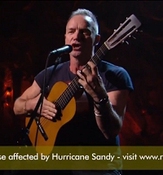 Nov 1, 2012
NBC-Universal To Host Hurricane Sandy Benefit Concert Featuring Sting, Bruce Springsteen, Billy Joel, And More...
On Friday, November 2, NBC-Universal will broadcast a one-hour telethon and concert for Hurricane Sandy relief efforts. The telethon, "Hurricane Sandy: Coming Together," will be live-streamed on NBC.com and will broadcast at 8PM Eastern and on a tape delay for the West Coast of the US. Sting, Bruce Springsteen, Jon Bon Jovi, Billy Joel, Jimmy Fallon, and Christina Aguilera are all scheduled to appear at Rockefeller Center in New York City for the benefit. NBC's Matt Lauer will serve as host, with the telecast airing on NBC and its cable stations including Bravo, CNBC, USA, MSNBC and E!. Money raised will benefit the American Red Cross, which is providing food, shelter and other support to those affected by the hurricane. To donate, please visit RedCross.org/ or call 1-800-RED-CROSS, or text the word REDCROSS to 90999 to make a $10 donation...
Read more
+ 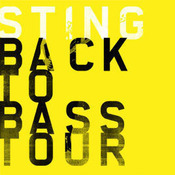 Oct 30, 2012
December 9th performance in Manila to move Araneta Coliseum - Important Ticket Information Update...
As previously announced, Sting's Back to Bass concert previously scheduled at the Mall of Asia Arena has been moved to Araneta Coliseum. There is no change to the show date, which remains Sunday, December 9th, 2012. If you have a ticket to the previous venue, please see exchange instructions below. Refunds if necessary are available at point of purchase, as outlined below. For fans interested in purchasing tickets to Sting's concert at the Araneta Coliseum, those will go on sale beginning October 31st for General Admission and on November 10th for all reserved and VIP seating. For further information regarding ticket exchange read on...
Read more
+