Sting Back To Bass Tour 2012 - Additional Concert in Sweden Confirmed..

Following the sell-out of Sting's Back to Bass concert at the Lisebergshallen in Gothenburg, an additional performance has been added for February 10.

To celebrate the 25th anniversary of his solo career and in support of Sting: 25 Years, the recently released box set collection, Back to Bass finds Sting performing songs spanning his dynamic solo career, plus a selection of The Police's greatest hits. Sting will be joined by a band including his longtime guitarist Dominic Miller, Rufus Miller (guitarist), Vinnie Colaiuta (drummer), Peter Tickell (electric fiddle), and Jo Lawry (vocalist).

Itinerary subject to change. Additional cities and venues to be confirmed.
Comments
0
You must be a logged-in member to add comments. Log In | Subscribe 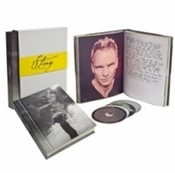 Nov 22, 2011
Rolling Stone Gift Guide JUST posted!
Rolling Stone magazine have just published their Rock & Roll Gift Guide featuring the best audio tech, gadgets, box sets and books for the ultimate music fan. One of the Box Sets featured is Sting 25 which they describe as follows: "Over a comprehensive three-CD set presented in a thick picture book filled with vanity shots and handwritten lyrics, this retrospective of Sting's solo career covers his post-Police exploration into jazz ("Englishman in New York"), remixed club-thumpers ("Send Your Love") and his endless supply of love songs for wife Trudie. The bonus live DVD of a 2005 Irving Plaza concert contains the only hint of Police-era youth ("Message in a Bottle," "Roxanne"), but his voice and songwriting have never lost their luster." Read more at http://www.rollingstone.com/music/photos/rock-roll-gift-guide...
Read more
+

Nov 22, 2011
Sting Back To Bass Tour 2012 - New Performances Confirmed in South Africa...
Live Nation is pleased to announce that four concerts in South Africa have been added to Sting's Back to Bass tour, including two performances in Johannesburg on March 24 and 25, as well as two in Cape Town on March 27 and 28. Fan Club presales will begin at 9AM (local time) today, Tuesday, November 22. Legacy Fan Club members will be given a one hour advance window at the start of the presale followed by a presale to all members beginning at 10AM (local time). Tickets will go on sale to the public Friday, November 25 at 9AM (local time)...
Read more
+