Gordon Matthew Thomas Sumner - better known as Sting - performed an exceptional show Wednesday night at BIEL. The musician, songwriter and singer took over the Beirut stage with his band for more than two hours.

For one night only and for the second time in Beirut, Sting performed some of his greatest tunes. The venue echoed with 'Message in a Bottle', 'Roxanne', 'End of the Game', and 'Hounds of Winter'.

With the first notes of 'Englishman in New York', the audience hailed and began singing along with the chorus - which appeared to make the star emotional. Like a human wave, the spectators sang and danced to the song as though in a trance.

At several moments during the performance, the Englishman spoke in French. Before the song 'Fields of Gold', he told a short story about living in the countryside, surrounded by fields, fields of gold. The notes echoed in the hall, and once again the crowd screamed with enthusiasm.

The audience could see that the star, who has won multiple awards, was having a good time. He clearly enjoyed being on the Beirut stage with his musicians and back vocalist.

For the song 'Desert Rose', a Lebanese derbake player joined the musicians on stage, which added an intimate feeling to the evening - as though Sting wanted to please his spectators and thank them for their warm welcome. His voice resonated as though his aura was expanding into every person’s core.

Sting performed a longer version of 'Roxanne' than the one we are used to hearing on CDs or on the radio.

He added some vocal improvisation and reggae beats which indirectly showed that even he didn’t want to stop the music. This improvised version of the hit made the crowd sing in fury. This blending of beats, vocals and guitar riffs gave a unique pinch to the song, a version only for Beirut, for this one night.

His charisma and elegance certainly didn’t leave female members of the audience indifferent. He entertained the audience and his musicians all along. His respect for his band was immediately apparent. Every time one of them was performing a solo, Sting stepped aside to let them shine.

But at one point, the evening was broken by a strange and unexplainable event on stage. A man wearing a large stuffed teddy bear head appeared on stage and danced around Sting and his band. The reason for presence was not clear, but the crowd reacted with laughter and the appearance added a joyful and juvenile touch to the evening.

Although he may be considered among the best performers and singers of the 20th century, Sting had an easy manner. He jumped on stage, moved from one side to the other, laughed and talked to his audience. The barrier which sometimes exists between the performer and his/her spectators was completely broken here. The stage, standing and seated areas became one entity where everyone sang along.

The 61-year-old legend was the lead vocalist of rock band The Police before beginning a solo career that eventually brought even greater success. Aside from touring the world, Sting is also known for his involvement with various humanitarian causes.

This concert – organized by Mix FM – put everyone in a festive mood. Sting was himself no matter what they say.

(c) The Daily Star By Chirine Lahoud
Comments
3
You must be a logged-in member to add comments. Log In | Subscribe
December 08, 2012 posted by humpies
Re; He is the man
be it a three piece too! Yo!!!!
December 04, 2012 posted by strabismus
Loveit !
http://www.youtube.com/watch?v=_T4SaNuxZO8 Cheers, Gladlee
November 30, 2012 posted by brijohn
He is the Man
Sting is just superb. He has changed more lives than he can imagine. His performances are alway such an event all over the world. Always with the best people on stage with him, be it a symphony orchestra or a delightful five or six piece band. Thank you for just being the person you are. Bob
Newer comments    1 - 3 of 3    Older comments 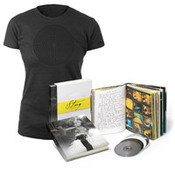 Nov 21, 2012
The 2013 Hear the World calendar: a unique photo collection in aid of a good cause...
Stars support the Hear the World Foundation with a series of striking black and white portraits. Monica Bellucci, Harry Belafonte, Sting, Georgia May Jagger: these are just a few of the many stars who have had their photos taken for the 2013 Hear the World calendar. Pictured with one hand behind the ear – the distinctive Hear the World pose synonymous with conscious hearing – they help raise awareness of a much-neglected issue: the vital importance of good hearing and the serious consequences of hearing loss. All proceeds from the sale of the calendars will go to projects supported by the charitable Hear the World Foundation, which runs a global campaign to help people in need as a result of hearing loss. The calendar is now available to buy in a limited edition from http://www.hear-the-world.com at a price of EUR 29.90/CHF 34.90 – the perfect holiday present for people who want to give an aesthetic gift and help a good cause in the process.
Read more
+