''In case you were wondering, Sting's still got it'' reports the Metro.us...

In case you were wondering, Sting's still got it...

And indeed, it was an older crowd that packed the house at Borgata Hotel Casino & Spa in Atlantic City, New Jersey Saturday night as part of his summer-long tour. But just one song into his set, and it was more than clear why Sting is a music legend who is still selling out shows across the world and remains worthy of respect and awe by fans of all ages. At age 60, he's still got it.

Rumored by his die-hard fans to be his best band yet, Sting was backed by a multi-talented group of musicians, including insanely gifted violinist Peter Tickell who, dare we say, stole the show at times.

There was no opening act, just a two-hour set played entirely by Sting and his band, and it didn't take long to see that it wouldn't have been easy, if not impossible, to properly set the stage for the music icon anyway.

The 2,400-seat venue was sold out for between $96 and $196 a ticket and fans were treated to more than 20 songs, including classics that were covered by Johnny Cash and Toby Keith like 'Hung My Head' and 'I'm So Happy'.

Between songs, Sting often mentioned his love for country music, even though he said he looks "stupid in a cowboy hat." A proponent of tantric sex, the singer has been quoted describing his own hours-long sexual escapades, and it wouldn't have been a proper Sting performance without him mentioning sex at least once - and he did, but only to say he doesn't understand why sex and religion are often separate, when the two are very clearly connected.

Sting, who appeared noticeably fit and youthful (must be all that tantric sex), also cracked up the crowd when describing his childhood in an industrial part of New Castle, England and how it inspired him to get in touch with nature later in life.

"I didn't see a tree till I was 15, so when I made a bit of money, I decided I would buy a little house in the country," he said. "Well, it was really more of a castle really."

At the end of the set, Sting thanked his fans for their raucous cheers and standing ovations in the form of two encores, a surprise treat he's been known to offer fans in past concerts.

Sting's next U.S. show is tomorrow, June 12, at Artpark in Lewiston, NY. Tickets are still on sale here. After that, he's globetrotting for the rest of the summer from Canada to Russia to show the world that he's clearly in his prime. 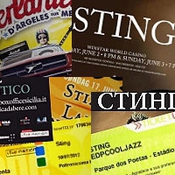 Jun 8, 2012
''Sting musically potent at sold-out Chastain'' reports the Atlanta Journal & Constitution...
In the past decade or so, Sting has turned his songs inside out. We've heard the symphonic versions. The lute versions. The electro-enhanced 'Don't Stand So Close to Me' version. So what, at halfway to 61 years of age and nearly 35 years into a career, is left to do? Why, play the songs in their basic, original forms, of course. That's exactly what the still-muscular, still intelligently sexy Sting is doing on his ''Back to Bass'' tour, a two-hour historical romp through his career that will have many grousing about the lack of huge hits (thankfully, even he has realized that the formless 'Roxanne' is overplayed and overrated and axed it from the show) and longtime fans perking up at the appearance of 'Sacred Love' and 'The Hounds of Winter'...
Read more
+

Jun 8, 2012
Summer 2012 Tour: Important Announcement For June 30 in Spain...
Concert in Tenerife Cancelled: The concert previously scheduled for June 30 in Santa Cruz De Tenerife, Spain at the Estadio Heliodoro Rodriguez Lopez has been cancelled. Refunds are available at point of purchase.

New Performance in Marbella Confirmed: On Saturday, June 30, Sting will perform at the Hotel Puente Romano Tennis Club in Marbella, Spain. Fan Club pre-sale begin at Monday, June 11 10AM to Tuesday, June 12 3PM . Tickets will go on sale to the public Tuesday, June 12 10AM. All times local time.
Read more
+