The following article by Patrick Doyle appeared in a November 2011 issue of Rolling Stone magazine...

Sting Goes Back To Basics - Stripped-down tour hits New York. Plus: Will the Police ever reunite again?

At noon, the day after a sold-out show at New York's Roseland Ballroom, Sting sits on a bench in Central Park overlooking an empty baseball field. Dressed in blue sweatpants and a white T-shirt, he stretches his legs in preparation for his daily bike ride from his Central Park West apartment up through Harlem.

"I'll sing on my bike while no one is listening," he says. "I'll just vocalize, make up melodies and sometimes think of a song. I like forward momentum. Perhaps its anxiety, perhaps its fear, but it becomes an addiction after a while. As I get older, I think I'm going to have to settle down at some point."

But not just yet. After wrapping the 'Symphonicity' tour in July - where he sang his hits with the 45-piece Royal Philharmonic Concert Orchestra - and celebrating his 60th birthday last month with Bruce Springsteen, Lady Gaga and Billy Joel, Sting is already on to his next move. On his Back to Bass Tour, he's joined by a killer new band in an unusual configuration: two guitarists, two violinists and a drummer. "It's a funny little band," he says. "We had no idea how it was going to sound."

At Roseland, Sting - playing electric bass at the centre of the stage - ran through a loose two-hour set packed with stripped down gems, from the jangly 'All This Time' to a fiddle-enhanced version of 2003's 'Never Coming Home'. "I think sometimes art thrives under limitations," he says. "Having no keyboards means there are lots of empty frequencies, so it's more creative in a way."

Along with smashes like 'Fields of Gold' - inspired, he explained onstage, by the cornfields surrounding his English estate - he's been breaking out rarities such as the 1993 album cut 'Love Is Stronger Than Justice. "I've done tours where I've done wall-to-wall hits," Sting says. "I can do that. But it's more satisfying to do obscure songs and still get the same positive reaction."

After wrapping in December, Back to Bass will hit Europe - and he hopes to return to the States next year. Then Sting will try to find time for his long wish list of future projects. He's like to do more orchestral shows, cut a follow-up to 'Songs From The Labyrinth' - his 2006 disc of 16th-century lute music - and return to England's Durham Cathedral, where he recorded a 2009 live DVD. "My task is to carve out territories in which I can operate, not to be stuck with just one thing," he says. "I like that variety I've given myself where you say, 'What's Sting going to do next?. It's usually pretty good, so buy a ticket.'"

One thing definitely not on that list? The Police, whose 2007 reunion tour was one of the bestselling of all time. "I thought the timing was good, which I'm taking full credit for," Sting says. "And it was a massively successful tour. There was always a question mark over the Police - were we broken up? We were finally able to put it to rest. But I'm not going to do it again. It was an exercise in nostalgia."

Instead, he'll keep moving forward. He just released a free iPad app to complement his new 25 Years solo box set - "It's a fascinating look at all aspects of my creative life" - and he's already written 30 songs for 'The Last Ship' a musical about the shipbuilding industry in his hometown of Newcastle, England. "We got a very emotional response, from laughter to tears," he says of the first table-reading a week earlier. "So I'm quietly confident. Doing a musical is a very concise form - but I'm enjoying the hell out of it."

Comments
1
You must be a logged-in member to add comments. Log In | Subscribe
December 14, 2011 posted by 7538lisa
Back to Basics/Stripped Down
Sting, I would love to see you come to a small, quaint Theater, The Sellersville Theater, in Pennsylvania. It is a small venue and I would want a front row seat, of course, but you've said in the past that you like small venues and the intimacy it brings. This place is absolutely beautiful for acoustics with carpeting all around. One day, my dream is to see you there! Check it out! www.st94.com!
Newer comments    1 - 1 of 1    Older comments

Nov 23, 2011
Win Free Tickets - Las Vegas Nov 25
Enter to win tickets for Sting's Back to Bass tour! On Friday, November 25, Sting will perform at the Colosseum in Las Vegas, NV and we're giving away a pair of tickets to two randomly selected fans.
Read more
+ 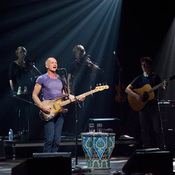 Nov 23, 2011
Win Free Tickets - Reno Nov 26
Enter to win tickets for Sting's Back to Bass tour! On November 26, Sting will perform at the Events Center in Reno, NV and we're giving away a pair of tickets to two randomly selected fans. Enter to win by November 24 at 12noon PST.
Read more
+